A part of the Baguan temple complex by guide Doug Gochfeld

Long was the country of Burma out of play for most western eco-tourists, but the winds of change that blew through its political landscape earlier this decade signaled the beginning of a new era. The country has opened up, and in addition to some of its world-famous cultural regions (including the temple-dappled countryside of Bagan and the floating village at Inlé Lake), many of its avian treasures, including all of its endemics, are now accessible to birders. We will bird a litany of different habitat types -- from the arid lowlands around Bagan to the rich high-elevation evergreen and unique high-elevation pine forests of Mount Victoria, and from the rich marshy ecosystem of Inlé Lake to the foothill forest around Kalaw, seeing a wonderful variety of birds, many of which are range-restricted (including up to ten endemic taxa) and difficult to see elsewhere.

The spectacular vistas and astonishingly lush forests of Mt. Victoria, with their fascinating variety of plant life, would be reason enough for a visit, but the birds are outstanding as well. The iconic White-browed Nuthatch was rediscovered in 1995 after a 60-year absence from the annals of science, and it shares its restricted Mt. Victoria home with the similarly range-restricted Mt. Victoria subspecies of Chinese Babax (Mt. Victoria Babax according to the IOC). Included in the rest of the dizzying array of special species supported by the mosaic of high-elevation habitats are Burmese Bushtit, Streak-throated and Rusty-fronted barwings, Brown-capped, Assam, and Striped laughingthrushes, Yellow-billed Blue-Magpie, Bar-tailed and Hume's treecreepers, Blyth's, Black-headed, and Green shrike-babblers, Himalayan Cutia, and Chestnut-tailed Minla.

Although worlds apart in feel from Mt. Victoria, the hot, dry scrub forest around Bagan is equally unique. This area hosts even more endemic taxa than the forests of Mt. Victoria, including Hooded Treepie, Jerdon's Minivet, Burmese Bushlark, White-throated Babbler, and Burmese Collared-Dove. We will search for all of these amidst Bagan's famed temple landscape (with more 2000 temples still in existence). These temples were mostly built 800-900 years ago and have been in large part reclaimed by nature in the intervening years, with the gaps filled in by some excellent habitat. In addition, the nearby riverine sandbar habitats could supply us with White-tailed Stonechat, Sand Lark, Rain Quail, Red Avadavat, Ruddy Shelduck, Gray-throated Martin and, if we are lucky, Striated Babbler, Small Pratincole, and River Lapwing.

Our time in the eastern portion of the country will provide a perspective on yet another distinctive form of Burmese life, as we will venture out into the world of the lake-dwelling folk of Inlé Lake. Between the lake and the serene foothill forests around Kalaw, we could pick up such species as Jerdon's Bushchat, Pheasant-tailed Jacana, Collared Myna, Burmese Yuhina, Black-backed Sibia, Spectacled Barwing, and White-browed Laughingthrush, among so many more!

Feb 11-26, 2023
Guide: TBA
Tour Manager: TBA
Tour Limit: 8
Status: Open - Space is still available on this tour, and we are accepting provisional bookings. No deposit is required until you receive the itinerary. Click below to book space.
Tour Fee: Fee TBD / 2021=$6125
REQUEST SPACE OR MORE INFO 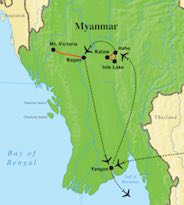