Enjoy our triplist below! For our tour description, itinerary, past triplists, dates, fees, and more, please visit our TOUR PAGE.

Click on the link at right to see this triplist in printable PDF format with media only on page 1. 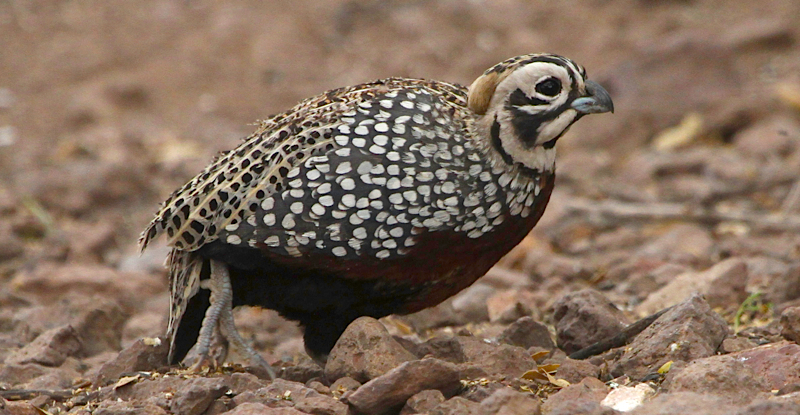 Always a much-wanted bird in the southwest, a harlequin male Montezuma Quail is surprisingly cryptic despite its boldly patterned plumage. (Photo by guide Chris Benesh)

We started out at the San Antonio airport where nearly all of us headed out on schedule to bird our way to Del Rio. George caught up with us there, and we enjoyed some nice views of things, though our sought-after vireos proved a bit elusive. We did enjoy a lovely pair of Zone-tailed Hawks, though. The next morning, we birded a couple of sites near the Rio Grande in Del Rio and added a number of "South Texas" specialties to the list, with such goodies as Olive Sparrow, Great Kiskadee, Couch's Kingbird, and even White-collared Seedeater. Then it was time to head west to Big Bend National Park.

Conditions were rather dry once we got all of the way out to Big Bend. While that made it tough for a few things, it did make the oasis birding a little more interesting, and thankfully, the oaks had leafed out on the hike to Boot Spring, so the Colima Warblers were happy and singing. It was beautiful the day we made the hike up to the springs, and there were a few other birds to distract us along the way.

Once we had finished at Big Bend, we headed north to the Davis Mountains for an overnight. The highlight of this venture was certainly the lovely pair of Montezuma Quail that greeted us soon after we arrived. A number of other interesting species were coming in to feed and keep us entertained.

Then it was off again the next morning, this time heading east to the Hill Country and Utopia. We made a major stop along the way at Lake Balmorhea, which was a treasure trove of aquatic birds. All of the Clark's Grebes (some with chicks), the flocks of Wilson's Phalaropes and Franklin's Gulls alone were worth the price of admission. Then it was on to Utopia.

The Hill Country was greener than where we'd been, and we had some good luck with most things. Golden-cheeked Warbler was a real highlight, and we had a couple of unexpected warbler bonuses in the way of Tropical Parula and a Rufous-capped Warbler. More color was provided by Painted and Indigo buntings. And there can't be any better way to wrap up a tour than an evening visit to the Frio Bat Cave. The sight of millions of bats streaming out of the mouth of the cave is an experience that will stay with you for a lifetime.

So I hope everyone is already making their plans for the reunion tour. You were a great bunch of folks to travel with and it would certainly be my pleasure to travel with you again. Maybe southeast Arizona in 2013? Until we get together again, all the best and may you have plenty of wonderful birding experiences along the way.

For more information about this tour, including future departures, visit our website at www.fieldguides.com. And to see this same triplist online, go to http://www.fieldguides.com/triplists/big12LIST.pdf and you will find the list in its entirety. 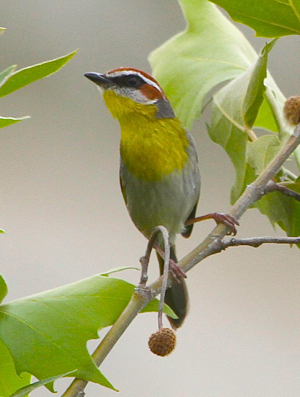 This close to the southern border of the US, there's always the hope of a Mexican vagrant. Hopes were fulfilled when this beautiful Rufous-capped Warbler was found at Park Chalk Bluff just before the tour began! (Photo by guide Chris Benesh) 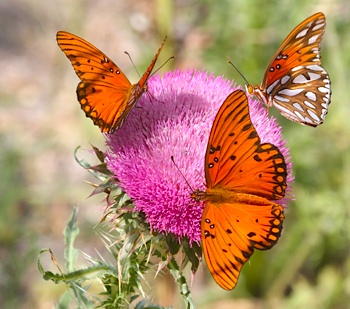 Adding a splash of color to the dry landscape, a trio of brilliant Gulf Fritillaries share a thistle flower. (Photo by guide Chris Benesh) 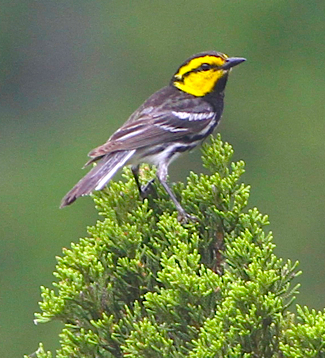 A Texas breeding endemic, the rare Golden-cheeked Warbler breeds only in mature oak-juniper woodlands on the Edwards Plateau. This was the overall winner as the top bird of the trip. (Photo by guide Chris Benesh) 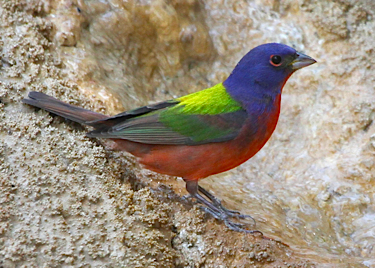 Is this the gaudiest bird in North America or what? The male Painted Bunting never fails to brighten his surroundings! (Photo by guide Chris Benesh) 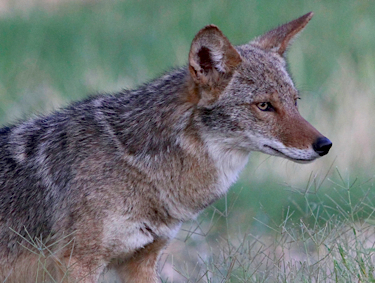 A few other memorable critters include the pink Coachwhip snake that came in to drink at Sam Nail Ranch, and a number of Texas Earless Lizards and some Texas Spotted Whiptails.

Also memorable was the glow in the dark scorpion we saw under UV light near the lodge in the Chisos Mountains.