Though covered with scaffolding, the Parthenon and the hulking mass of the Acropolis still impresses. (Photo by guide Megan Crewe)

Early May is a wonderful time to explore the timeless landscapes of rural Greece. With a combination of gorgeous scenery, patterned tapestries of wildflowers, and an ever-changing mix of birds, the countryside offers plenty to enjoy. Add in a handful of cultural attractions -- ancient temples, 1000-year old mosaics, a world class museum or two -- and a congenial group of traveling companions, and you get a fine mix of memories. This year, we had a rather toasty time throughout, with temperatures in the mid 80s and lots of sunshine; our only significant rain coming high on Mount Parnassos, making our search for higher altitude birds a rather soggy affair! The fine, settled weather meant we had surprisingly few migrants (other than the myriad shorebirds, that is), presumably because they just kept flying. But there were lots of highlights regardless.

Great Crested Grebes performed their charming "mirror dances". Masked Shrikes gathered nesting material and hunted for tasty morsels around our picnic spot at Doriskos. Slender-billed Gulls paddled around a seaside pond, looking down their long noses. A Rueppell's Warbler flicked through a flowering bush, so close we could almost reach out and touch him. European Rollers flashed turquoise wings as they chased after flying prey. A hammer-headed Eurasian Hoopoe chanted from a tall tree. Screaming clouds of Common and Pallid swifts swirled over tight-packed rooftops. Little Bitterns skulked along the edges of dense reedbeds. A Eurasian Wren chortled from a felled tree trunk, his tail cocked over his head. Technicolor European Bee-eaters swarmed over pond edges and causeways, or sat like beads on a string along utility wires. A pair of Sardinian Warblers bounced through the grass near the entrance to the Acropolis, ferrying hurried mouthfuls to two chirping youngsters. A Black Woodpecker made several noisy passes before swooping in to land on a dead tree trunk. A male Stonechat serenaded from a tiny evergreen.

White Storks stalked roadside fields or stood tall on huge stick nests (and one even demonstrated its head-back, bill-clacking courtship display). A pair of Egyptian Vultures glided overhead, strikingly white against a blue, blue sky. A sand-colored Isabelline Wheatear flicked across a rough plowed patch. Spotted Redshanks, sporting their striking breeding plumage, huddled in a wind-whipped pond. A Blue Rock-Thrush ferried mouthfuls of food to youngsters tucked into a crevice on the Treasury of Athens building at Delphi. But of course, it wasn't just the birds that drew our attention on this tour. We spent a morning in the fantastic new Parthenon museum, with Irini to point out some of the special treasures, then wandered among buildings that dated back more than two millenia.

Thanks so much for joining me for some spring adventures in this lovely country. I hope to see all of you again, somewhere, someday!

For more information about this tour, including future departures, visit our website at www.fieldguides.com. And to see this same triplist online, go to http://www.fieldguides.com/triplists/gre12LIST.pdf and you will find the list in its entirety. 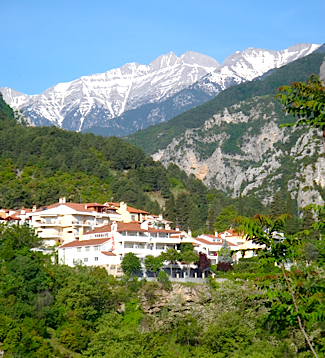 The touristy village of Litochoro nestles at the base of Mount Olympus. (Photo by guide Megan Crewe)

GRAYLAG GOOSE (Anser anser) – A pair at Lake Kerkini were presumably staying to breed rather than heading north; the female nibbled grass while the male kept a watchful eye on us.
MUTE SWAN (Cygnus olor) – Dozens floated on ponds and impoundments on the Evros delta, with others around Fanari and on Lake Kerkini.
COMMON SHELDUCK (Tadorna tadorna) – The most numerous duck of the trip, with big groups in flight over the Evros delta, Ptelea Lagoon, Lake Kerkini and the wetlands around Fanari. We had particularly nice "on the ground" looks at a few pairs dabbling along the edges of some of the impoundments on the Evros.
MALLARD (Anas platyrhynchos) – Relatively common in wetlands along the coast and around Lake Kerkini.
GARGANEY (Anas querquedula) – A couple of males paddled among reeds on the Evros delta, their bold white supercilia making them easy to spot as they appeared and disappeared behind a group of snoozing Wood Sandpipers and Black-winged Stilts.
COMMON POCHARD (Aythya ferina) – A couple of males floated among the Ferruginous Ducks on Lake Mitrikou and dozens more paddled and dove on Lake Kerkini. Normally, this species is long gone (to points north) by the time of our tour.
FERRUGINOUS DUCK (Aythya nyroca) – Especially nice views of a group floating near one of the little islands in Lake Kerkini, and a surprising 22 (a high number for a Field Guides Greece tour) on Lake Mitrikou. The white patch near the tail end of these otherwise dark brown ducks was visible from a surprising distance.
Podicipedidae (Grebes)
LITTLE GREBE (Tachybaptus ruficollis) – Best seen on Lake Kerkini, where a few dove near tiny islets on the eastern shore, among the far more numerous Eared Grebes. We saw others from the hillside overlooking Lake Mitrikou.
GREAT CRESTED GREBE (Podiceps cristatus) – Especially common at Kerkini, where scores dotted the lake, performing their courtship mirror dances (with head plumes waggling), busily adding mouthfuls of wet vegetation to their platform nests or (in the case of one bird), carefully turning eggs before setting back down to incubate them. We saw many others on Lake Mitrikou. [N]
EARED GREBE (Podiceps nigricollis) – There were quite a few of these handsome grebes along one edge of Lake Kerkini, diving and preening, with the gold breeding plumes for which they're named catching the sunlight and glowing against their black faces and necks.
Phoenicopteridae (Flamingos)
GREATER FLAMINGO (Phoenicopterus roseus) – A little group snoozed on the mudflats along Lake Vistonida, looking decidedly grayish. This species was recently split from the flamingoes in North America, partly on the basis of that duller plumage.
Procellariidae (Shearwaters and Petrels)
LEVANTINE SHEARWATER (Puffinus yelkouan) – A small gang floated among the much bigger Yellow-legged Gulls on the flat calm sea en-route to Kerkini, and several strings of flying birds labored past, working much harder than they would have had it been windy. This was formerly considered to be the eastern subspecies of the Mediterranean Shearwater.
Ciconiidae (Storks) 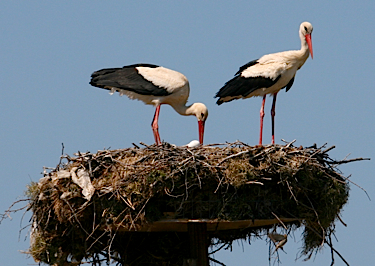 Greece is home to a staggering number of White Storks, which nest on utility poles (and specially constructed platforms) all across the northern part of the country. The untidy stork nests are also home to dozens of Spanish Sparrows and House Sparrows, which build their "condos" into the base of the stick piles. (Photo by guide Megan Crewe)

Fields of blood red Common Poppies stretched along roadsides all across Greece, signs that some farmers are still using "the old ways" rather than spraying their crops with heavy herbicides. (Photo by guide Megan Crewe)

SPUR-WINGED PLOVER (Vanellus spinosus) – Numerous pairs dotted the Evros delta, some standing on mud mounds, some pattering across dry salt flats, and some apparently hunkered on nests. [N]
BLACK-BELLIED PLOVER (Pluvialis squatarola) – Small numbers in wetlands along the coast, including the Evros delta, Lake Vistonida and Ptelea Lagoon. A few were already well into their snazzy breeding plumage.
KENTISH PLOVER (KENTISH) (Charadrius alexandrinus alexandrinus) – A handful pattered along the sandy beach at Ptelea Lagoon -- nice spotting Ivan! Eventually, one of them moved to the shore of the lake, which allowed us to study it in much better light. This species was recently split from North America's Snowy Plover.
COMMON RINGED PLOVER (Charadrius hiaticula) – A handful moved among the far more numerous Little Stints in one of the Porto Lagos saltpans. This species is larger and stockier than the next, and shows bright orange on the bill and legs.
LITTLE RINGED PLOVER (Charadrius dubius) – One on a gravel bar in a stream in the Dadia National Park provided a real "Where's Waldo" puzzle as it stole among the plover-sized (and plover colored) rocks -- particularly once it sat down with only its head showing! "See the two white rocks?"
Haematopodidae (Oystercatchers)
EURASIAN OYSTERCATCHER (Haematopus ostralegus) – A group rested on the back side of a lagoon on the Evros delta, their long orange beaks bright against the background, near where we found our Spotted Redshanks. We saw others around Lake Vistonida and at the Porto Lagos saltpans.
Recurvirostridae (Stilts and Avocets)
BLACK-WINGED STILT (Himantopus himantopus) – Our first were a pair snoozing near some Wood Sandpipers and Garganeys on the Evros delta. We had better looks -- at more active birds striding around on their long pink legs -- near the former pratincole colony along the edges of Lake Vistonida, and at Ptelea Lagoon.
PIED AVOCET (Recurvirostra avosetta) – Best seen on the Evros delta, where one pair demonstrated their distinctive feeding method in a roadside lagoon. We saw others at the Porto Lagos saltpans and Ptelea Lagoon.
Scolopacidae (Sandpipers and Allies) 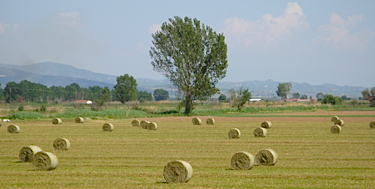 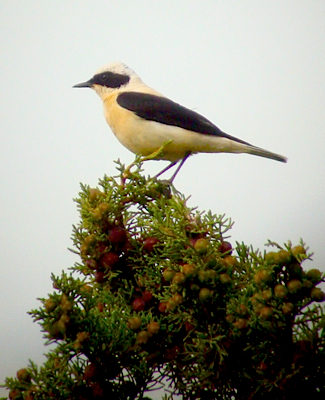 A trio of wheatears are possible on the Greece tour. This was the most widespread species: the Black-eared Wheatear. It comes in two color morphs; this is the pale throated form. (Photo by guide Megan Crewe) 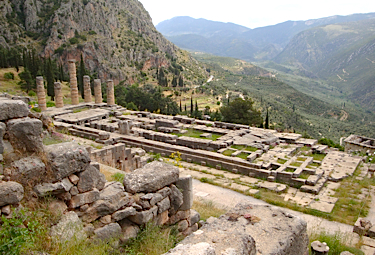 Delphi's ruins sprawl for hundreds of meters down the mountainside. In the foreground is the foundation of the temple of Apollo and Dionysius. This was where Delphi's famous oracle made her proclamations. (Photo by guide Megan Crewe)

EUROPEAN RED SQUIRREL (Sciurus vulgaris) – Several scurried up trunks and along branches in the forest on Mount Olympus, proving admirably acrobatic as they leapt from tree to tree. This species is larger than North America's Red Squirrel, and comes (as we saw) in colors ranging from rust to a fairly dark brown.
RED FOX (Vulpes vulpes) – One -- looking surprisingly dark -- worked gingerly across a snow patch high on Mount Parnassos, then picked its way through a myriad boulders and grass clumps as it climbed to the ridge top.
BLACK-BACKED JACKAL (Canis mesomelas) – One made a very brief appearance along the clifftop at the quarry south of Lithotopos, peering at us over the edge for a few seconds before slipping back out of sight.

Herps we found during the trip (thanks for the IDs, Jim!)

European Pond Turtle (Emys orbicularis) - We spotted one hauled out on the side of an concrete irrigation ditch on the Evros delta.

Balkan Pond Turtle (Mauremys rivulata) - One at the concrete stream crossing near Dadia.

Hermann's Tortoise (Testudo hermanni) - One at Iasmos gorge wasn't too excited about being closely examined -- and let Jim know by peeing all over his gloves.

European Green Toad (Bufo viridis) - One under a board near Fanari, seen as we walked out to check the pratincole colony.

Balkan (Greek Marsh) Frog (Pelophylax kurtmuelleri) - One in the water trough at the Doriskos picnic area was definitely a bit the worse for wear.

Greek (Balkan) Stream Frog (Rana graeca) - One sat on a streamside rock below the monastery on Mount Olympus.

Worm Snake (Typhlops vermicularis) - One of these tiny blind snakes was squashed along the roadside near our Delphi hotel; how it got there was a mystery, since this species normally spends its life underground!

Dice Snake (Natrix tessellata) - A dead one near the water trough at Doriskos had us wondering whether it was the water or the holiday crowds that caused the "carnage" there!

Totals for the tour: 170 bird taxa and 3 mammal taxa