Does Montana really possess the most spectacular scenery in the lower 48? This photo by tour participant Pat Newman certainly supports that position, but why not take the tour yourself and form your own opinion?

This is one of the greatest scenic wildlife trips in North America. On this trip, everywhere we look are incredible mountains and picturesque valleys coupled with abundant wildlife, including both birds and mammals. Yellowstone National Park is the biggest draw for the visitor and rightfully so, for if not for the geothermal features (geysers, hot springs, fumaroles, mudpots, and frying pans) it would be like most mountain areas of the Rocky Mountain West. But Yellowstone is also special for other reasons and is teeming with wildlife; the Yellowstone experience is one not to be forgotten anytime soon.

Then there is the less well-known Glacier National Park, which is purely magical to the human psyche, with an abundance of snow meltwater, hanging waterfalls, glaciers and snowfields, tall trees and colorful wildflowers, and an accompanying complement of birds and mammals.

But few visitors have experienced the areas in between these two magnificent national parks. We traveled this off-the-beaten path, because we know it personally by having lived and worked in these out-of-the-way places that few visitors (and even Montana residents!) have seen.

It was quite the trip, covering 1850 miles in 9 days. We crossed twelve high-elevation mountain passes, including crossing the Continental Divide on eight separate occasions. Most surprising was the fact that we traveled from the Arctic drainage to the Atlantic drainage to the Pacific drainage all within a four-hour period!

In all, we tallied 184 species of birds and 26 species of mammals. Highlight birds included: Boreal Chickadee, Black Swift, Sage Sparrow, Alder and Gray flycatchers, McCown’s and Chesnut-collared longspurs, and Short-eared and Burrowing owls. Our mammal list was equally impressive with Gray Wolves, Grizzlies, Moose, Mountain Goats, and Bighorn Sheep topping the charts for large mammals, while the rare Pygmy Rabbit won the prize by far for the top small mammal.

Our fondest bird memories included two beautifully-clad, breeding-plumaged Harlequin Duck drakes playing and feeding in a pattern by flying upstream, then descending and kayaking the Yellowstone River through a turbulent cascade only to repeat the process. We also watched a Golden Eagle performing an undulating territorial display in Glacier National Park. And we observed two Burrowing Owls sticking their heads out of a badger hole, not to mention incredible views of perched and flying Short-eared Owls at close range. The remarkable parachuting displays of the McCown’s Longspur will be etched in our minds. And of course a pale female Merlin, of the Great Plains or Prairie race (F.c. richardsonii), carrying a Brewer’s Blackbird was yet another highlight.

Our fondest memories of watching mammals, many with newborn young, included close views of adult Gray Wolves on two occasions. We found seven Grizzlies, including a rare sighting of a sow with a cub that ventured onto the plains from the Rocky Mountain Front. We also found what is becoming rare in Montana these days--Moose! We saw two in Yellowstone, eight on the Rocky Mountain Front, and closer-than-expected views of two in Glacier.

The Field Guides 2012 Yellowstone to Glacier tour was a smashing success, much in part due to mother nature, the cooperating weather, and a fun group of adventurous travelers seeking a unique experience. It was a pleasure for John and me to guide you from Yellowstone to Glacier, to the off-the-beaten-path places, and for the wildlife, skyscapes, and landscapes that we fondly symbolize and call Montana (the Big Sky state). Thanks for traveling with Field Guides! 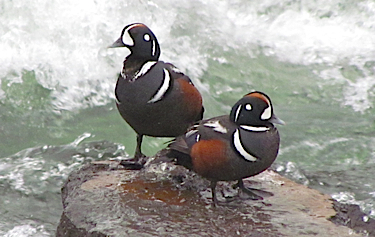 After a session of shooting the rapids in the torrential Yellowstone River, two male Harlequin Ducks take a break and contemplate another run. (Photo by guide Terry McEneaney) 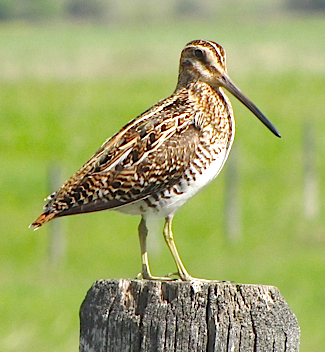 A prairie fencepost makes an excellent perch for a Wilson's Snipe between performances of its winnowing display flight. (Photo by tour participant Pat Newman) 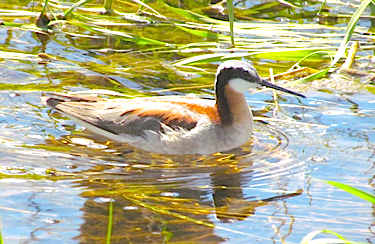 Wilson's Phalaropes, like this lovely female, are a common sight at the myriad of small sloughs along the eastern front of the Rockies. (Photo by guide Terry McEneaney) 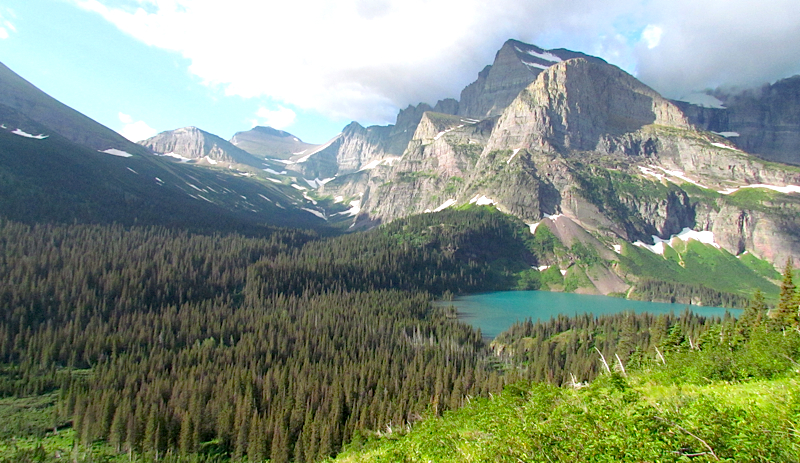 Thank goodness for digital cameras. With all the spectacular mountain scenery on this trip, the film costs would be prohibitive! (Photo by guide Terry McEneaney) 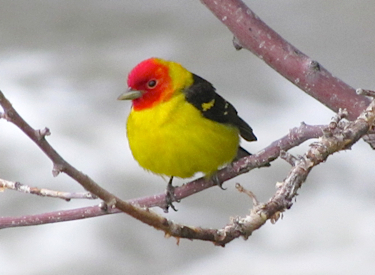 A ray of sunshine on a cloudy day (or even a sunny one!) -- a male Western Tanager. (Photo by tour participant Pat Newman)

PYGMY RABBIT (Sylvilagus idahoensis) – A super look at two of these remarkably cute yet small adult lagomorphs in southwest Montana.
NUTTALL'S (MOUNTAIN) COTTONTAIL (Sylvilagus nuttalli) – Seen on days 1, 3, and 4.
WHITE-TAILED JACKRABBIT (Lepus townsendi) – Seen on day 2 in the dark and in the headlights. 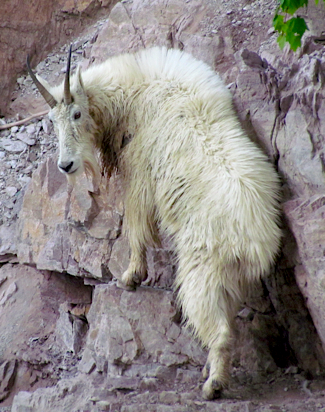 The term "sure-footed" must surely have been coined to describe the Mountain Goat; its delicate hooves allow it to step on the tiniest of ledges and scale impossibly steep cliff faces. (Photo by guide Terry McEneaney)

LEAST CHIPMUNK (Tamias minimus) – Seen 6 of 9 days.
YELLOW-PINE CHIPMUNK (Tamias amoenus) – Found on days 1, 2, and 8.
YELLOW-BELLIED MARMOT (Marmota flaviventris) – Seen on days 2,3, and 7.
COLUMBIAN GROUND SQUIRREL (Spermophilus columbianus) – Found on 7 of 9 days of travel.
WYOMING GROUND SQUIRREL (Spermophilus elegans) – Found on days 4 and 5 while in southwest Montana.
UINTA GROUND SQUIRREL (Spermophilus armatus) – Found on days 1, 2, and 4. The primary ground-squirrel of Yellowstone NP.
BLACK-TAILED PRAIRIE DOG (Cynomys ludovicianus) – Found three colonies on day 5.
FOX SQUIRREL (Sciurus niger) – Found in Missoula.
RED SQUIRREL (Tamiasciurus hudsonicus) – Saw the reddish morph in Yellowstone, and the grayer-reddish form in Glacier NP.
BEAVER (Castor canadensis) – One individual was seen on day 1.
MUSKRAT (Ondatra zibethica)
RED FOX (Vulpes vulpes) – Watched one outside of YNP on the porch of someone's house. It was definitely wild, but apparently being fed, because it was very unusual behavior for a Red Fox.
GRAY WOLF (Canis lupus) – Saw 2 individuals one day and 3 individuals on another day--all in Yellowstone NP with very good close views.
BLACK BEAR (Ursus americanus) – Got to see two individuals, both in Yellowstone NP.
BROWN (INCL. GRIZZLY) BEAR (Ursus arctos) – Found several individuals in Yellowstone NP, including sows with cubs. But our greatest find and experience was a large sow with a lone cub on the East Front of the Rockies. This doesn't happen that often.
ELK (Cervus canadensis) – Dozens.
MULE DEER (Odocoileus hemionus) – Hundreds.
WHITE-TAILED DEER (Odocoileus virginianus)
MOOSE (Alces alces) – We struck it rich--these ungulates (cloven-hoofed mammals are becoming uncommon to rare in Montana-depending on the predator pressure and area. We saw one in Yellowstone, eight on the East Front of the Rockies (including cows and newborn calves) and two in Glacier (on both East and West sides). Both nearly ran into our vehicle.
PRONGHORN (Antilocapra americana)
AMERICAN BISON (Bison bison) – In excess of 1,500 individuals, all in Yellowstone NP.
MOUNTAIN GOAT (Oreamnos americanus)
BIGHORN SHEEP (Ovis canadensis) – Found on days 2,3,7 6 in both Yellowstone and Glacier. Total at least 14 animals.