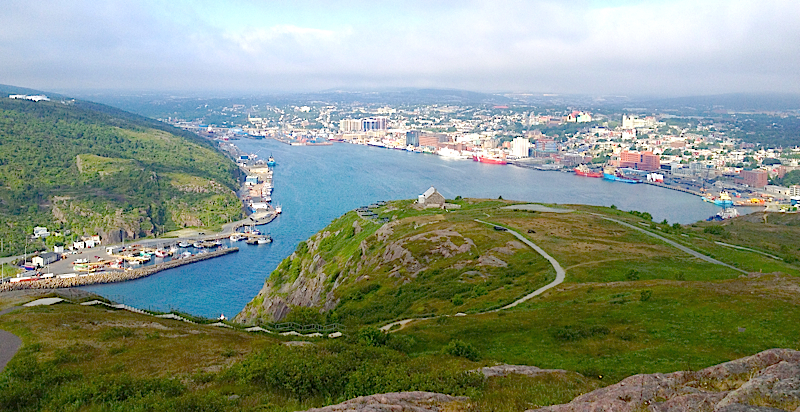 A view of the picturesque capital of Newfoundland, St John's, from the top of Signal Hill. (Photo by guide Chris Benesh)

This year's Newfoundland & Nova Scotia trip was a lot of fun, despite one significant hitch that was beyond our control. We started off our adventure in St. John's, a picturesque port city in Newfoundland. Here, most views are spectacular, and we were able to enjoy them from such sites as Signal Hill and Cape Spear, the easternmost point of land in North America. We ventured south of town to Bay Bulls, where we took a boat out to Witless Bay where we enjoyed the spectacle of many thousands of birds swirling in and out of the fog and mist near Gull and Green islands. The sights, sounds, and yes, smells, were unforgettable. Dominating the scene were thousands of Atlantic Puffins, Common Murres, Black-legged Kittiwakes, and hundreds of regal Razorbills. We also enjoyed a trip out along the road to historic Cape Race, where we encountered Willow Ptarmigan and a couple of Short-eared Owls that really performed well in front of us. It was from here that distress signals from the Titanic (sinking nearly 375 miles away) first reached shore back in 1912.

Later the same day, we learned of our own ship disaster, that the ferry scheduled to take us to Nova Scotia late the following day was still out of service. This meant we had some quick rescheduling to do. We headed to Cape St. Mary's for a fantastic afternoon visit with the Northern Gannet colony. No one will soon forget the sight of these birds zooming in and out of the fog. The following day, we traveled across Newfoundland, arriving at Port aux Basques in time for dinner and a quick sleep. We then steamed across the Cabot Strait, arriving mid-morning in North Sydney, (Cape Breton) Nova Scotia. After grabbing a tasty lunch, we headed to Morien Bar to do a bit of shorebirding (nice view of Hudsonian Godwit) as well as a visit to scenic Louisbourg Harbour.

The following day we visited the Cape Breton Highlands, where as good as the birds were, they took a back seat to a few of the wonderful marine mammals we saw on our boat trip out of Pleasant Bay. We encountered pods of Long-finned Pilot Whales, some with Atlantic White-sided Dolphins, had a close encounter with a couple of Humpback Whales, and saw lots of curious Gray Seals. On our way off of Cape Breton Island, we stopped at the Canso Causeway to watch the spectacle of plunge-diving Northern Gannets and a couple of close Minke Whales. Then it was on to a splendid beach where we strolled along the shore to enjoy a small group of Piping Plovers.

Our last birding destination was Liscombe Lodge, and we had some nice encounters there. Topping the nice birding was the young Black-backed Woodpecker that came in to investigate us, and the American Mink that trotted across the lodge grounds in front of us. The stretch of the Glen Elg-Waternish road we covered was also quite enjoyable, complete with some stunning Evening Grosbeaks. Finally, on our way to Halifax, we made a final stop to pick up the Acadian subspecies of Nelson's Sparrow. A great way to wrap up our visit to northeastern Canada.

Thanks to our driver, Fred, who took such good care of us during the trip (not to mention becoming a fledgling birder along the way). Also, thanks to Catherine & Paul Barrett who opened up their home and feeders for us. Finally, thanks to all of you for making the trip such a special one. I had a great time traveling around with all of you. Until next time, good birding out there!

For more information about this tour, including future departures, visit our website at www.fieldguides.com. And to see this same triplist online, go to http://www.fieldguides.com/triplists/nsn12LIST.pdf and you will find the list in its entirety. 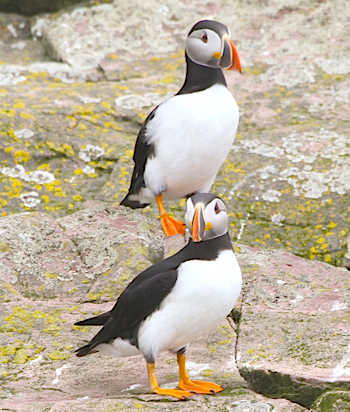 The trip out to Witless Bay was one of the tour highlights, thanks in large part to the incredible numbers of comical Atlantic Puffins seen. (Photo by guide Chris Benesh)

NORTHERN GANNET (Morus bassanus) – The runaway winner in the "best bird" category on this trip. A elegant looking bird, we had some great studies of it at a breeding colony at Cape St. Mary's, and then enjoyed an active plunge-diving fest next to the Canso Causeway. Wow!
Phalacrocoracidae (Cormorants and Shags)
DOUBLE-CRESTED CORMORANT (Phalacrocorax auritus)
GREAT CORMORANT (Phalacrocorax carbo) – Great looks at an immature bird and then an adult along the coast of Cape Breton.
Ardeidae (Herons, Egrets, and Bitterns)
GREAT BLUE HERON (Ardea herodias)
Pandionidae (Osprey)
OSPREY (Pandion haliaetus)
Accipitridae (Hawks, Eagles, and Kites)
BALD EAGLE (Haliaeetus leucocephalus)
NORTHERN HARRIER (Circus cyaneus)
SHARP-SHINNED HAWK (Accipiter striatus)
NORTHERN GOSHAWK (Accipiter gentilis) – We had a terrific view of one that flew right past us at the top of Signal Hill that continued on across the narrows of St. Johns Harbour.
BROAD-WINGED HAWK (Buteo platypterus)
Falconidae (Falcons and Caracaras)
AMERICAN KESTREL (Falco sparverius)
MERLIN (Falco columbarius)
Charadriidae (Plovers and Lapwings)
PIPING PLOVER (Charadrius melodus) – We had a nice walk down a beautiful beach near Pomquet to see four adults of this rare shorebird. No evidence of young this year.
Scolopacidae (Sandpipers and Allies)
SPOTTED SANDPIPER (Actitis macularius)
GREATER YELLOWLEGS (Tringa melanoleuca)
WILLET (Tringa semipalmata)
LESSER YELLOWLEGS (Tringa flavipes)
WHIMBREL (Numenius phaeopus)
HUDSONIAN GODWIT (Limosa haemastica) – Great looks at one at the Morien Bar.
SHORT-BILLED DOWITCHER (Limnodromus griseus)
WILSON'S SNIPE (Gallinago delicata) [*]
Laridae (Gulls, Terns, and Skimmers)
BLACK-LEGGED KITTIWAKE (Rissa tridactyla)
RING-BILLED GULL (Larus delawarensis)
HERRING GULL (AMERICAN) (Larus argentatus smithsonianus)
GREAT BLACK-BACKED GULL (Larus marinus)
COMMON TERN (Sterna hirundo)
ARCTIC TERN (Sterna paradisaea) – Nice comparisons between this species and the next.
Alcidae (Auks, Murres, and Puffins)
COMMON MURRE (Uria aalge)
THICK-BILLED MURRE (Uria lomvia) – We did manage to pull one of these out from the crowd one the boat trip. Too much fog at Cape St. Mary's to see those birds.
RAZORBILL (Alca torda) – One of my favorite alcids, we had some terrific views on the Witless Bay trip.
BLACK GUILLEMOT (Cepphus grylle)
ATLANTIC PUFFIN (Fratercula arctica) – The second highest vote getter in the "best bird" category, the experience in Witless Bay was sublime with hundreds of birds coming in and out of the mist and fog.
Columbidae (Pigeons and Doves) 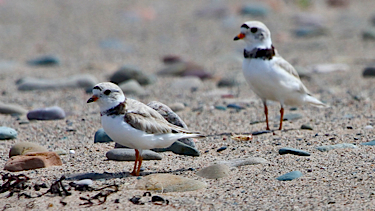 Four adult Piping Plovers were a nice find at Pomquet, Nova Scotia; this is an endangered species in Canada, declining in part due to the heavy disturbance to their preferred beach nesting areas. (Photo by guide Chris Benesh) 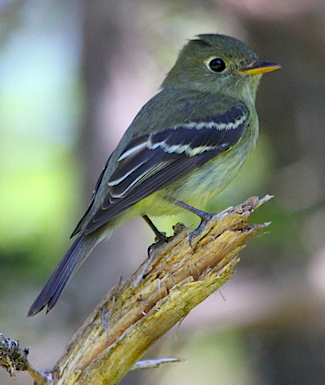 Empid identification is pretty straightforward in Newfoundland, where only 2 species (Alder and Yellow-bellied) occur as regular breeding birds, and they are quite distinct from each other. This is a Yellow-bellied Flycatcher. (Photo by guide Chris Benesh) 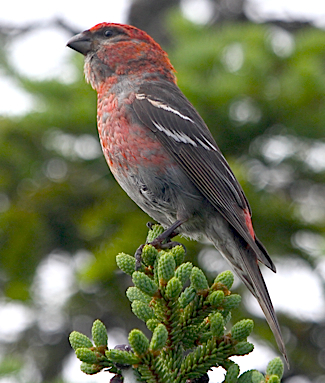 One of the highly-prized birds of the northern boreal forests, a beautiful male Pine Grosbeak. (Photo by guide Chris Benesh)

Our boat trip out of Pleasant Bay, on Cape Breton, was especially fantastic for a variety of marine mammals, including these Long-finned Pilot Whales. (Photo by guide Chris Benesh)

CARIBOU (Rangifer caribou) – We managed to see a lone animal on the south end of the Avalon Peninsula.