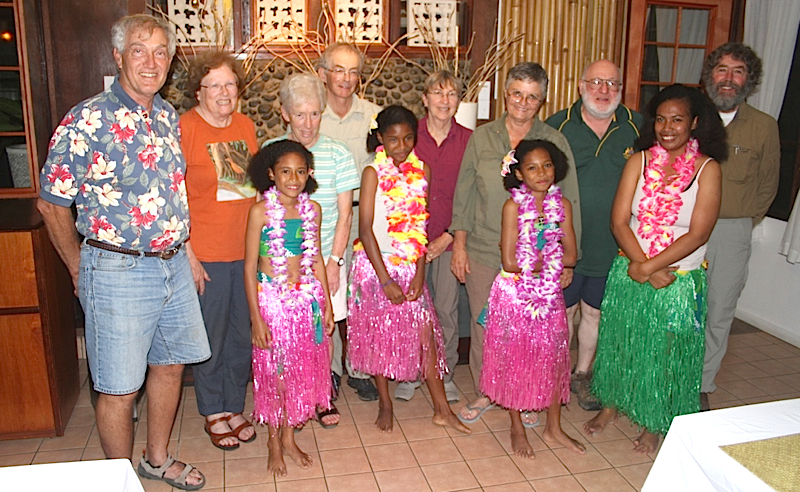 A quartet of bright and beautiful local girls add a splash of color to the group photo, standing out amidst the muted field dress of the tour participants. (Photo by guide Phil Gregory)

The small group Field Guides tour of PNG 2012 went there over the general election, always a more than usually interesting time, but happily we encountered no problems and even our flights worked out well, barring a late arrival then a 2-hour delay on the day we left the country. We had a diverse and keen group interested in the culture as well as the birds, which was nice. The staff at our hotel in Port Moresby were very welcoming, and next day the Raggiana Birds-of-Paradise up at Varirata gave a nice show, with a supporting cast including Barred Owlet-Nightjar, Beautiful Fruit-Dove, Brown-headed Paradise-Kingfisher and White-bellied Whistler, all showing really well.

Ambua had just had a lot of heavy rain again, but expert local guide Joseph and the fruiting tree in the lodge grounds were ready for us, and we swiftly got onto Brown Sicklebill, Princess Stephanie's Astrapia, Lawes's Parotia, Short-tailed Paradigalla, Blue BoP, Superb BoP, and a bonus of Loria's Satinbird (now promoted out of the birds-of-paradise into a new family). Not bad for the first couple of hours, and the rain held off!

Next day we went up to below the Tari Gap area, getting above the fog-shrouded lodge, and had wonderful looks at the bizarre male King-of-Saxony BoP, some really good Ribbon-tailed Astrapias, and even a good male Princess Stephanie's Astrapia despite the roadworks and logging at this site. Wattled Ploughbill with pink face paddles was another great bird, and male Regent Whistlers were uncommonly accommodating this trip, whilst a Lesser Melampitta circumnavigated us and showed quite well.

Next morning luckily enough the dawn came cold and clear, so we went for the male Blue Bird-of-Paradise and we quickly got onto great looks of him at his song post, with Marbled Honeyeater, Capped White-eye, and Island Leaf-Warbler showing nicely too. The Sooty Owl also came good, and we enjoyed the visit there. A Black Sicklebill back at the lodge was a nice bonus too.

This year we very sensibly flew direct from Ambua to Kiunga, avoiding the angst of trying to fly into fog-shrouded Tabubil, but Western Province seems to be regressing rather than progressing and we had some logistic grievances as well as quite poor weather. Our guide Samuel is running for local MP for the quaintly named North Fly Open electorate, so he was heavily preoccupied, and his senior guide has gone to work for the gas industry, whilst the bus supplied was like something out of the Mad Max movies, and the Guest House seemed to have trouble supplying hot water to some rooms, and doesn't seem to have spent much money on fittings and decor of late, shall we say. Still, things in PNG are seldom straightforward and we made the best of it, and managed some very nice birds.

Boat trip day was distressingly wet; the rain was pretty unrelenting and much of the morning was really a write-off, but we did make a comeback with a great male King BoP at his lek, salvaged a Twelve-wired BoP, had a cooperative Common Paradise-Kingfisher, saw some wonderful Blyth's Hornbills, Palm Cockatoo and a flock of the rare Yellow-eyed Starlings.

A male Flame Bowerbird was seen twice, though our guide's first directions were somewhat problematic, and we managed displaying Grey-headed Goshawk and Trumpet Manucode here. We also had a good performance at the Km 17 lek late one afternoon. Interestingly, what was a hybrid swarm in 2010 has now been rejuvenated and we had some pretty good-looking male Greater BoP's moonwalking.

After a flight across in fine conditions, (the rumored liquidation of Airlines PNG fortunately being just a rumor), Kumul Lodge was a second opportunity for some of the high altitude specials, and the feeders there came good with great views of Brown Sicklebill and once again the shortest-tailed adult male Ribbon-tailed Astrapia I've ever seen, plus Brehm's Tiger-Parrot and very obliging Archbold's Bowerbird and Mountain Firetail. Other good birds were 3 Crested Berrypeckers with crests erect, Yellow-breasted Bowerbird, a bonus Torrent-lark, a big flock of New Guinea White-eyes and best of all a Feline Owlet-Nightjar after we had been down to hear a New Guinea (Dusky) Woodcock roding at dusk.

Then it was back (almost on time!) to Port Moresby and a trip out to the PAU for some nice easy birding--it gives you a totally false impression of what birding in PNG is like!--and fine views of a flock iof 47 vagrant Plumed Whistling-Ducks, a pair of Papuan Frogmouths, Common Kingfisher, and a neat bower of Fawn-breasted Bowerbird.

The finale was Varirata with Growling (Magnificent) Riflebird showing all too briefly, a wonderful immature Doria's Goshawk perched up for scope views, the very distinctive Dwarf Whistler, Yellow-billed Kingfisher at long last, and a terrific clown-faced White-faced Robin. The departure day morning saw us score Silver-eared Honeyeater as a last lifer before shopping at the amazing PNG Art warehouse.

Thanks to Teresa at FG HQ for good logistics, and to local guides Leonard, Ben, Joseph, Samuel, Edmund, and Max 1 and Max 2, who all gave a lot to the trip and were ace spotters and assistants. Thanks also to the group for coming and coping so well with the various tribulations, to Larry for sharing his scope and to everyone for an enjoyable and stimulating trip. Safe travels and hope to meet up again at some point.

Anatidae (Ducks, Geese, and Waterfowl)
PLUMED WHISTLING-DUCK (Dendrocygna eytoni) – A flock of 47 at the PAU were a great surprise, this was formerly a vagrant to New Guinea.
WANDERING WHISTLING-DUCK (Dendrocygna arcuata) – Just 10 at the PAU.
RADJAH SHELDUCK (Tadorna radjah) – Two seen twice in flight at or near the PAU.
SALVADORI'S TEAL (Salvadorina waigiuensis) – Great looks at 3 birds at the Ok Menga intake, this year the river was low enough for the boulders to show. [E] 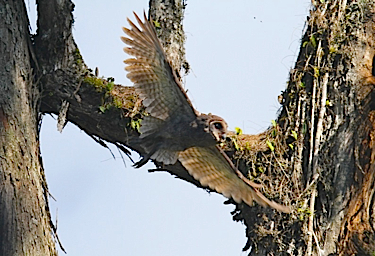 The Tari Valley, highland home of the famous Huli Wigmen, is also home to this Sooty Owl, which gave us a wonderful showing as it glided from its day roost in a hollow tree. (Photo by guide Phil Gregory) 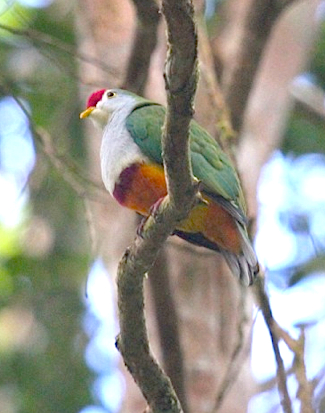 The name "Beautiful Fruit-Dove", while appropriate for this bird, seems to imply that other fruit-doves are not so attractive, but nothing could be further from the truth. In fact, this is just one of 6 beautful fruit-doves we saw on this tour! (Photo by guide Phil Gregory)

Honeyeaters are an incredibly diverse group in PNG. One of the most interesting ones is the Smoky Honeyeater, which has the unique habit of blushing, its yellow facial skin flushing to a bright red in an instant when the bird is agitated. This bird seems to be in a state of blush somewhere in between calm and full agitation. (Photo by guide Phil Gregory) 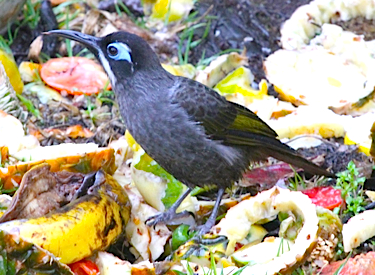 Belford's Melidectes is among the largest and most garrulous of the honeyeaters. In highland regions such as at Kumul Lodge, their loud calls are a regular feature of the soundtrack of the forest. (Photo by guide Phil Gregory) 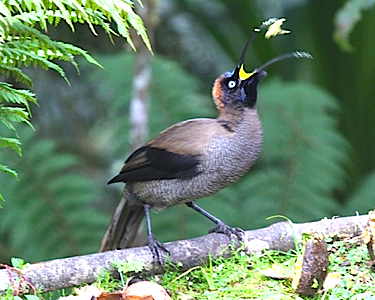 Of course the star attractions of PNG are the birds-of-paradise, and this tour nets a healthy 20+ species of them. They're generally difficult to photograph, but at least the aptly-named Brown Sicklebill, like this blue-eyed female, visits the Kumul Lodge feeders from time to time. (Photo by guide Phil Gregory)

SPECKLED DASYURE (Neophascogale lorentzii) – We saw one above Ambua, and some saw another later, we usually see this small diurnal carnivore at some point. [E]
COMMON NORTHERN CUSCUS (Phalanger orientalis) – A dead individual in Varirata had had its head removed, presumably by an accipiter.

Some nice butterflies were seen on the trip and we should have a photo archive that can hopefully lead to some identifications being made. The standard ref. is Parsons, M (1999) The Butterflies of Papua New Guinea, Academic Press. This has been remaindered and might be available at something way below the original very high price.

Trip favorites amongst the birds were hard to pick but the paradisaeids figured large with the Raggiana and then Greater Bird-of-Paradise lek displays being huge highlights, along with the King Bird of Paradise at his display ground, plus the amazing King-of Saxony and those stunning Brown Sicklebills, Princess Stephanie's and Ribbon-tailed Astrapias. The Blue BoP also made a good showing this year and was a trip highlight for several folks.

Salvadori's Teal was a great sight, as was finally getting a Feline Owlet-nightjar to show, just sorry not eveyone was there to enjoy it. Lesser Melampitta was another favorite, as was Fawn-breasted Bowrbird with its bower, the Yellow-billed Kingfisher which took so long to come this year, the male Crested Satinbird and the first time in years we have had a really good look at Yellow-capped Pygmy-Parrot. Glossy Swiftlet was also admired, the habit of flying in heavy rain is truly odd.

Kumul Lodge was enjoyed for its striking architecture, friendly staff, great bird feeding table and the amazing orchid Garden developed by Max Mal, whilst the subalpine grasslands of the Tari Gap are always a terific sight. Our new hotel in Port Moresby is also a keeper with great staff who looked after us very well, and even got our footwear cleaned ready for Oz customs.

Totals for the tour: 302 bird taxa and 2 mammal taxa