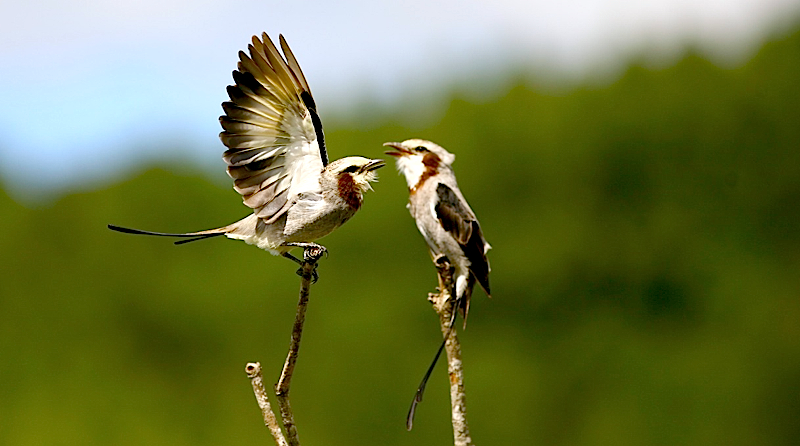 En route to Intervales on our first morning afield, we were treated to point-blank views of this marvelous pair of Streamer-tailed Tyrants displaying near the road! (Photo by guide Marcelo Padua)

This year's Brazil Nutshell was a wonderful and very birdy tour. We began with an important addition, guide John Coons, whom I had met previously on several occasions but with whom I'd never led a tour. It was great having him along, and we owe several brilliant scope views of birds to him. I can hardly wait to do this tour with him again next year! The weather was also kind to us, and we had only one morning of a travel day where the rain was somewhat inconvenient, but we were awarded with sunshine for most of the trip. Unfortunately, that was also the reason why the Pantanal was so dry, the driest I have ever seen it in the month of March.

We started the tour in Sao Paulo with all participants arriving on time with all their luggage (always a relief for the leader!). From there we made our way to Intervales, but not without making a few stops, including one that produced some of the best views I've ever had of displaying Streamer-tailed Tyrants. Upon reaching our lodge and just getting into our rooms, a pair of Blue-bellied Parrots flew by and sat on a nearby tree allowing us fantastic scope views of these rare and endangered parrots. What a way to start the tour! The following days at Intervales were nothing but a birding delight, with four different species of tapaculos, one great look at four Black-fronted Piping-Guans, Saffron Toucanets, Black-cheeked and Rufous gnateaters, Chestnut-backed and Brassy-breasted tanagers, and so many others that made for a fun, productive, and memorable start to the tour.

At Iguassu, the falls were, as always, the highlight, but the birding was not far behind. We had wonderful looks at Creamy-bellied Gnatcatcher, Southern Bristle-Tyrant, Southern Antpipit, and Rufous-headed Tanager, and we located a hummingbird feeder where we had amazing looks at ten different species of hummers in just over an hour, not to mention the Green-headed Tanagers and euphonias coming to the feeder as well. I think we were all a bit dizzy and amazed by the time we left that place!

The Pantanal lived up to its reputation and even though it was drier than we had expected, the birding was magnificent, with Hyacinth Macaws, Jabirus, Roseate Spoonbills, Yellow-billed Cardinals, and more Limpkins than we could (or wanted to!) count. We made our way through the Pantanal from one Jabiru to the next with a Mato Grosso Antbird, a Rusty-backed Spinetail, and even a Pale-crested Woodpecker in between. Not a bad way to travel!

I thoroughly enjoyed this tour and hope you all did too. I'm looking forward to seeing you again on one of our many Brazil tours.

For more information about this tour, including future departures, visit our website at www.fieldguides.com. And to see this same triplist online, go to https://fieldguides.com/triplists/nut12LIST.pdf and you will find the list in its entirety.

Rheidae (Rheas)
GREATER RHEA (Rhea americana) – These odd looking birds were a common sight around our lodges in the Pantanal!
Tinamidae (Tinamous)
BROWN TINAMOU (Crypturellus obsoletus) [*]
UNDULATED TINAMOU (Crypturellus undulatus) [*]
Anhimidae (Screamers)
SOUTHERN SCREAMER (Chauna torquata)
Anatidae (Ducks, Geese, and Waterfowl)
WHITE-FACED WHISTLING-DUCK (Dendrocygna viduata)
BLACK-BELLIED WHISTLING-DUCK (Dendrocygna autumnalis)
MUSCOVY DUCK (Cairina moschata)
Cracidae (Guans, Chachalacas, and Curassows)
CHACO CHACHALACA (Ortalis canicollis) – Abundant and loud, these birds are the alarm clock of the Pantanal!
DUSKY-LEGGED GUAN (Penelope obscura) – We had a couple of brief looks at these birds. Unfortunately Guans are very scarce in most places as a result of the action of illegal hunters!
CHESTNUT-BELLIED GUAN (Penelope ochrogaster) – Great looks in the pantanal where they have become rather tame and wander around the lodge's building.
BLUE-THROATED PIPING-GUAN (Pipile cumanensis)
RED-THROATED PIPING-GUAN (Pipile cujubi) – The northern Pantanal seems to be a hybridization zone between Blue-throated and Red-throated, but we were able to see clearly the two species.
BLACK-FRONTED PIPING-GUAN (Pipile jacutinga) – Seeing four of these rare and endangered birds nearly at eye level, was certainly one of the major highlights of the tour. [E]
BARE-FACED CURASSOW (Crax fasciolata) – These gorgeous Curassows are fairly abundant in the Pantanal where they are not hunted, and we had great looks at them.
Ciconiidae (Storks)
MAGUARI STORK (Ciconia maguari) – We nearly missed this one this year, but we managed to spot one on our way to the airport on the last day.
JABIRU (Jabiru mycteria) – Several of them were already nesting during the time we were in the pantanal, which is a direct result from the exceedingly dry year in the pantanal!
WOOD STORK (Mycteria americana)
Phalacrocoracidae (Cormorants and Shags)
NEOTROPIC CORMORANT (Phalacrocorax brasilianus)
Anhingidae (Anhingas)
ANHINGA (Anhinga anhinga)
Ardeidae (Herons, Egrets, and Bitterns)
LEAST BITTERN (Ixobrychus exilis) – I have to admit I was starting to worry a bit that we would not see this one, but after spending some time looking for it we finally had great looks at it!
RUFESCENT TIGER-HERON (Tigrisoma lineatum) – Common! 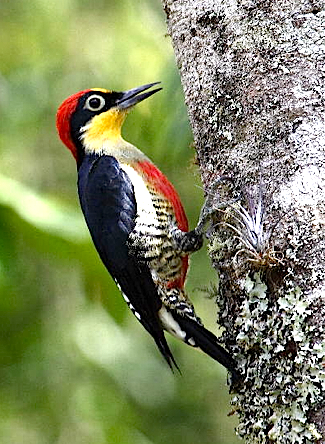 The handsome Yellow-fronted Woodpecker was a regular visitor to feeders around the lodge at Intervales, and was just one of 15 species of woodpeckers seen (and another heard) on this tour! (Photo by tour participants Steve and Alison Wakeham) 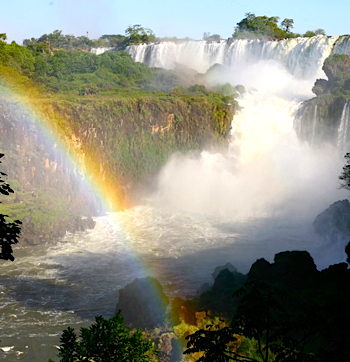 The thundering falls at Iguazu are always a highlight of the trip; the birding here isn't bad either! (Photo by guide Marcelo Padua) 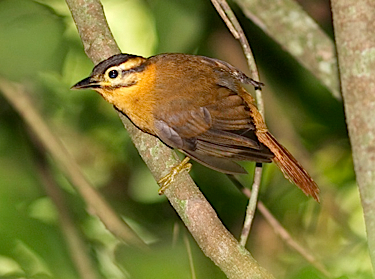 Foliage-gleaners are, for the most part, a fairly homogeneous (and rather drab) group of birds. However, there are several notable exceptions, including the gorgeous Black-capped Foliage-gleaner seen here. (Photo by guide Marcelo Padua) 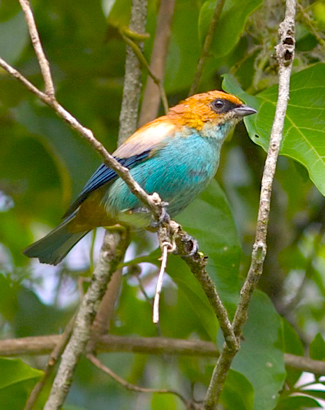 Brazil is home to an exceptional number of gorgeous tanagers, many of them endemic. Though this Chestnut-backed Tanager isn't quite an endemic, it most certainly is gorgeous! (Photo by guide Marcelo Padua) 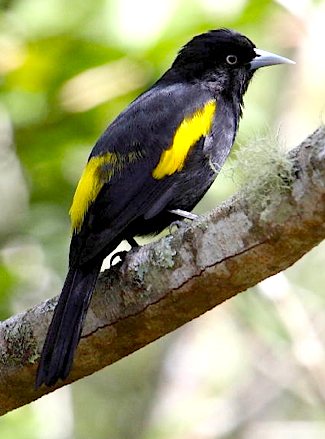 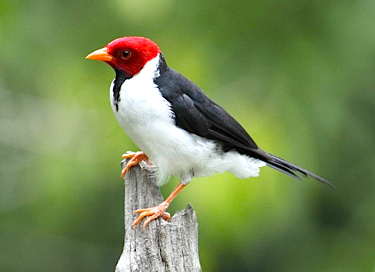 Ironically, the beautiful Yellow-billed Cardinal, along with the 5 other species in the genus Paroaria, are not true cardinals at all, and have recently been moved from the Cardinalidae to the Emberizidae. (Photo by tour participants Steve and Alison Wakeham)