Thailand, "the land of smiles," is one of the oldest countries in Southeast Asia, with unique food, culture, language, and lifestyle. These are reasons enough to visit this friendly country, but add to them biogeography: Thailand's position at an ornithological crossroads accounts for a rich country list of more than 1000 species. Our dry-season survey of Thailand's northwestern and central regions provides great birding variety, with a series of multi-night stays allowing two to three full days of birding at several excitingly different venues, ranging from sea level to above 8000 feet.

The critically endangered Spoon-billed Sandpiper highlights an extensive list of shorebirds we'll search for in coastal areas south of Bangkok, a list which also includes other scarce species like Nordmann's Greenshank and Asian Dowitcher. Elsewhere near Bangkok, Kaeng Krachan and Khao Yai national parks offer up a vast assortment of birds with chances for standouts such as Siamese Fireback, Wreathed Hornbill, Heart-spotted Woodpecker, Banded Kingfisher, Long-tailed Broadbill, and Ratchet-tailed Treepie, as well as the chance for numerous mammal species including Indian Elephant and White-handed Gibbon.

In the mountains of the northwest, a completely different suite of species awaits, from resident minivets, parrotbills, yuhinas, sibias, and forktails, to an incredible array of migrant warblers, flycatchers, and thrushes. Hume's Pheasant, Black-throated Tit, Spectacled Barwing, Giant Nuthatch, Ultramarine Flycatcher, and Himalayan Cutia are just some of the many outstanding species we could encounter in this diverse region.

Thailand's winning combination of superb birding, delectable cuisine, and fascinating culture is hard to beat, and impossible to forget!

Jan 15 - Feb 5, 2022
Guided by: Jay VanderGaast & Uthai Treesucon
Tour Manager: Karen Turner
Tour Limit: 12
Status: Waitlisted - The itinerary has not been finalized for this tour. The trip has provisionally filled but, if you are interested, we can waitlist you for the trip. As we do not require deposits until the itinerary and price are finalized, we often have folks drop off a tour when the deposit is required, and so space opens up! Click below to be waitlisted for this tour with no obligation; if you are waitlisted, we will also notify you in case of an added departure of this tour.
Tour Fee: Fee TBD / 2021=$6975
REQUEST WAITLIST OR MORE INFO

Enjoy looking through the 12 most recent Field Guides triplists for this tour linked below! 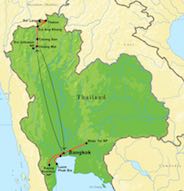