Our tour targets several magnificent endangered species as we work with guides from the Cambodia Bird Guide Association, founded in 2016 and dedicated to safeguarding avian rarities and protecting the environment as well as working to make a difference in the Cambodian countryside. One star is the critically endangered Giant Ibis, a shy woodland bird with but a few small remnant populations (about 370 birds in all); and there's the almost equally rare White-shouldered Ibis in an area that also has White-rumped (Pygmy) Falcon and an exciting range of forest species including woodpeckers (Black-headed, White-bellied, Great Slaty, Rufous-bellied, Yellow-crested, Rufous, and Spot-breasted) and owls (Brown Fish-Owl, Spotted and Brown wood-owls, Oriental Scops-Owl, Asian Barred Owlet, and Brown Hawk- Owl). We'll also visit the fantastic waterbird colony on Lake Tonle Sap, where hundreds of herons and egrets are joined by a few pairs of both Lesser and Greater adjutants, in precipitous decline elsewhere, and the beautiful Painted Stork. Being out on the lake among the floating villages en route to the sanctuary is an amazing experience.

After visiting a now-abandoned rice project for the rare Milky Stork, Bronze-winged and Pheasant-tailed jacanas, Pied Harrier, and a potentially splittable population of Sarus Crane, we'll spend a day and a night at the Vulture Restaurant at Veal Krous where three Critically Endangered species of vulture--Red-headed, White-rumped, and Slender-billed--come in to feed. En route to the north we will make a foray for Bengal Florican, a very rare bustard that survives on grassland sanctuaries that are under heavy pressure from rice farmers. At Kratie on the Mekong we will search for the rare Asian Golden Weaver and the recently described Mekong Wagtail, whose scientific name commemorates Sam Veasna, that pioneer of Cambodian bird conservation whose namesake Center is the agent for our tour. The finale is a visit for the newly described Cambodian Tailorbird near Phnom Penh--ours was the first tour group to see this is 2013 while it was still undescribed.

We'll also spend time birding among the extraordinary ruins of Angkor Wat and the incredible nearby temple complex, a stunning, exotic backdrop and one of the cultural wonders of the world! We have an expert temple guide here, so the cultural aspects are nicely catered for and the photo opportunities wonderful.

Combo Tours
If you would like a longer birding holiday, some departures of this tour may be combined with:
MYANMAR: BIRDING BURMA

Feb 12-28, 2022
Guide: TBA
Tour Manager: TBA
Tour Limit: 8
Status: Open - Space is still available on this tour, and we are accepting provisional bookings. No deposit is required until you receive the itinerary. Click below to book space.
Tour Fee: Fee TBD / 2020=$5575
REQUEST SPACE OR MORE INFO 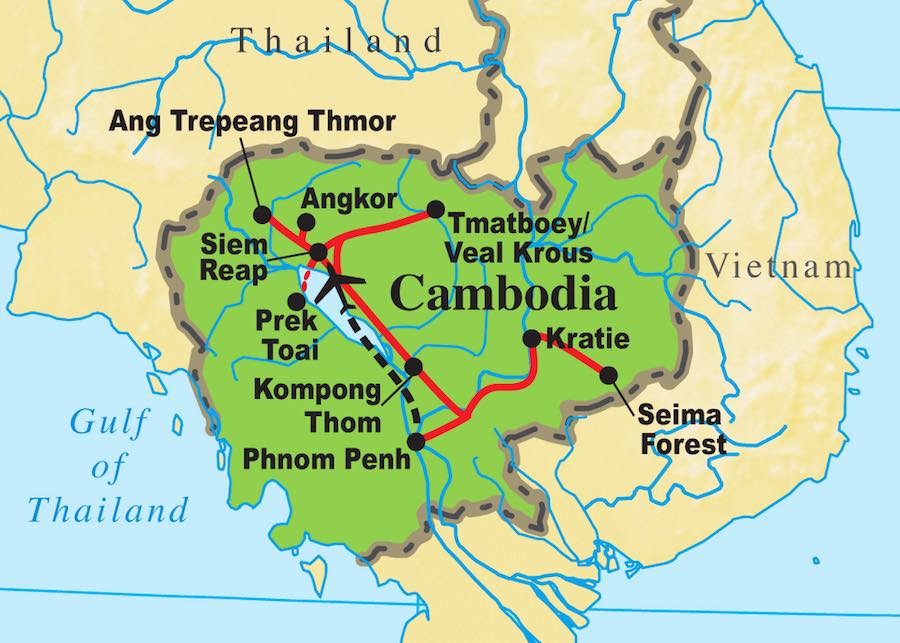