A fun, energetic journey through a fabulous birding region, with rare regional and Colombian endemics aplenty and the great spectacle of Oilbirds at Rio Claro!
Overview
Key Info
Triplists
Gallery

Sometimes, you feel like a little road trip, and the Magdalena Valley could be considered one of the true royal roads of birding, with a suite of endemic and endangered species like few others! Stretching for nearly a thousand miles, the Magdalena River flows between the Central and Eastern cordilleras of the Andes in Colombia, its basin draining more than 100,000 square miles. On this tour, we'll visit the valley floor for several days but chiefly bird on the western slope of the Eastern Cordillera and the eastern slope of the Central. In a few words: this fantastic journey will feel like the real Colombia!

The tour begins in Bogota (for airport convenience) but moves quickly westward, stopping for endemics like Velvet-fronted Euphonia and Apical Flycatcher as we head for the city of Ibague. In the foothills here, we'll visit a lodge where Tolima Dove, Yellow-headed Brushfinch, Tolima Blossomcrown, and Indigo-capped Hummingbird are often seen, among many other great species of the Central Cordillera, including Crested Ant-Tanager, which roves the forests in raucous flocks. The next morning finds us at the El Hato wetlands, where we'll take in many more widespread birds of the countryside before making a bee-line to tiny Victoria, near a small reserve with endemics such as Beautiful Woodpecker, White-mantled Barbet, Sooty Ant-Tanager (should be called Stunning, not Sooty), and White-bibbed Manakin, plus birds with restricted ranges like Sooty-headed Wren.

And then? How about the spine-tingling emergence of hundreds of Oilbirds from their cave at Cañon del Rio Claro Reserve? This location is also very good for difficult species like Saffron-headed Parrot, Antioquia Bristle-Tyrant, Magdalena Antbird, and Slaty-winged Foliage-gleaner. Then we'll tear ourselves away to visit the reserve called El Paujil, named after its most famous resident, the regal, endangered (and endemic) Blue-billed Curassow. This valley site will have lots of birds we don't see elsewhere, some of which range north to eastern Panama, such as Black Antshrike.

Our visit to the "Reinita Cielo Azul"--or Cerulean Warbler--Reserve will be a tour highlight. Here the oak forests host the warblers and also Gorgeted Wood-Quail (always difficult), Parker's Antbird, Magdalena Tapaculo, Black Inca, White-bellied and Ochre-breasted antpittas, and Yellow-throated Spadebill. Lower down, nearer our lodge, we'll look for Niceforo's Wren, Bar-crested Antshrike, Turquoise Dacnis, Yellow-browed Shrike-Vireo, Double-banded Graytail, the very rare Chestnut-bellied Hummingbird, and perhaps (if one is about) Recurve-billed Bushbird! The tour concludes at Bucaramanga, with a strong effort to see the rare Mountain Grackle in the Paramo de Berlin and perhaps clean up a few missing species before flying back to Bogota.

Without question, this is an energetic tour, with a few muddy or slick trails, some full days, and a short horseback transfer up to the forest at the Cerulean Warbler Reserve. It's also, without question, a truly fun journey, with memorable, often very rare birds every single day. Join Jesse for a fine ride through la auténtica Colombia!

Combo Tours
If you would like a longer birding holiday, some departures of this tour may be combined with:
COLOMBIA'S SANTA MARTA MOUNTAINS & CARIBBEAN COAST
COLOMBIA'S EASTERN CORDILLERA

Other Tours in COLOMBIA 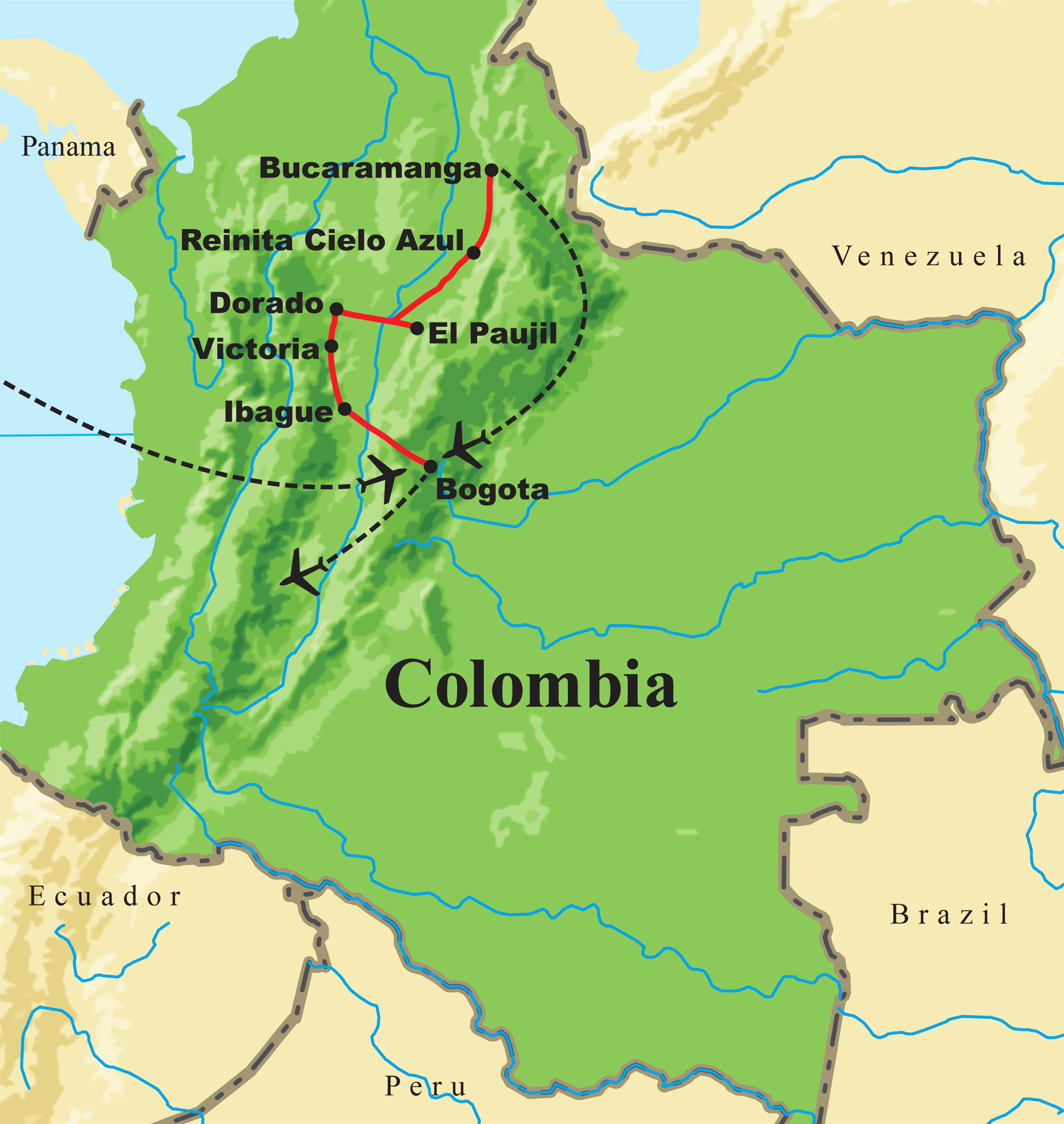