Cloud forests of two Colombian cordilleras and their rich assortment of hummingbirds and tanagers are highlights of this escape across the Caribbean to tropical Colombia. Starting in Cali and exiting through Manizales and Bogota, we will use several good city hotels and one simple ecotourism lodge primarily to access Andean forests, but also dry woodland, marshes, and the paramo.
Overview
Key Info
Triplists
Gallery

The sugarcane fields of the Cauca Valley are a logical place for Cali's airport, but one we'll leave quickly for the excitement of Andean birding. Our first night will be in the foothills of the Western Andes, providing an opportunity to find the endemic Multicolored Tanager along with a very considerable variety of hummingbirds and tanagers at feeders and in forest patches. Heading up the Cauca Valley the next day to Buga, we'll next look for Grayish Piculet and Apical Flycatcher along with more widespread birds of dry woodland and marsh.

The premier site for the rich avifauna of the montane Choco is Cerro Montezuma below Tatama National Park. With three nights here, we'll have a good opportunity to bird slowly over a 3000-foot range in elevation as we seek Buffy Tuftedcheek, Uniform Treehunter, Orange-breasted and Scaled fruiteaters, Olivaceous Piha, Beautiful Jay, Choco Vireo, Black Solitaire, Gold-ringed, Black-and-gold, Glistening-green, and Purplish-mantled tanagers, Tanager Finch, Indigo and Chestnut-bellied flowerpiercers, and Chestnut-breasted and Golden-collared chlorophonias, most of these endemic to the Choco biogeographic region.

Crossing the Cauca Valley again will bring us to the Central Andes, our second cordillera, where the lower forests of the Otun-Quimbaya reserve are a great place to find the endangered Cauca Guan and the spectacular Red-ruffed Fruitcrow, along with smaller special birds like Crested Ant-Tanager and (another chance) Multicolored Tanager. A short way to the north is the university town of Manizales, our base for visiting the famed Rio Blanco reserve, where an antpitta feeding program will hopefully produce the endemic Brown-banded and perhaps a couple more species. These wet forests are home to great mixed flocks of ovenbirds, flycatchers, warblers, and tanagers, and while we are enjoying great general birding we'll keep an eye out for such rarities as Rusty-faced Parrot, Golden-plumed Parakeet, Dusky Piha, Red-hooded and White-capped tanagers, and Masked Saltator. We will also get near the top of the Central Andes, the paramo of Los Nevados National Park, where hummingbirds at and above treeline include beauties such as Buffy Helmetcrest, Black-thighed Puffleg, and Rainbow-bearded Thornbill.

We aren't done yet as we finish the tour at mid-elevations near Manizales on a private nature reserve with more chances for good birds we may have missed, such as Blue-lored Antbird, Parker's Antbird, Moustached Puffbird, Dwarf Cuckoo, and Grayish Piculet. New birds may include Scaled Antpitta, White-crowned Tapaculo, Golden-collared Manakin, and Speckle-breasted Wren.

Other Tours in COLOMBIA

Nov 5-14, 2021
Guided by: Jesse Fagan & local guide
Tour Manager: Nicole Cannon
Tour Limit: 8
Status: Waitlisted - The itinerary has not been finalized for this tour. The trip has provisionally filled but, if you are interested, we can waitlist you for the trip. As we do not require deposits until the itinerary and price are finalized, we often have folks drop off a tour when the deposit is required, and so space opens up! Click below to be waitlisted for this tour with no obligation; if you are waitlisted, we will also notify you in case of an added departure of this tour.
Tour Fee: $4325
Deposit: $450
REQUEST WAITLIST OR MORE INFO

Nov 3-12, 2023
Guide: TBA
Tour Manager: TBA
Tour Limit: 8
Status: Open - Space is still available on this tour, and we are accepting provisional bookings. No deposit is required until you receive the itinerary. Click below to book space.
Tour Fee: Fee TBD / 2021=$4325
REQUEST SPACE OR MORE INFO 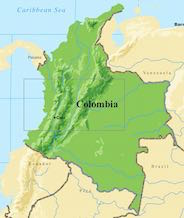