Lying just across the Straits of Florida, the Bahamas are home to more than 21 species that have rarely or never been recorded in the US. Our tour visits three of the richest islands, where all of these 21 West Indian specialties can be found. We'll begin on Abaco; with its extensive Caribbean Pine forest and mixed hardwood coppice, it is home to many species including the endemic Bahama Yellowthroat, Cuban Pewee, and the Bahamian subspecies of Cuban Parrot. And while hummingbirds are few, they include the sparkling Cuban Emerald and the endemic, purple-and-rose-gorgeted Bahama Woodstar.

From Abaco we'll travel to Eleuthera Island. Among the birding highlights are the oversized Great Lizard-Cuckoo that haunts the tall coppice, and possibly a Kirtland's Warbler, an endangered species recently found wintering on just a few islands. (We have found at least one and as many as eight individuals of this rare warbler on each of our tours since 2009!) In the process, we'll have time to enjoy some West Indian butterflies including such beauties as the Atala and Polydamas Swallowtail, along with another 30 species or so that we have recorded on our trips. In 2015, we began traveling to the island of Andros to see the endemic Bahama Oriole, found only here (now extirpated from Abaco) with a population estimated to be around 250 individuals.

So, if island endemics, pink sand beaches, eating cracked conch, and trying Kalik beer all sound like a good time (they are), then join us in the Bahamas!

Mar 11-15, 2023
Guide: TBA
Tour Manager: TBA
Tour Limit: 6
Status: Open - Space is still available on this tour, and we are accepting provisional bookings. No deposit is required until you receive the itinerary. Click below to book space.
Tour Fee: Fee TBD
REQUEST SPACE OR MORE INFO 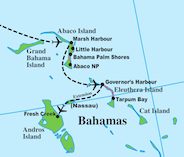